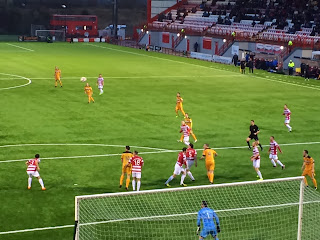 This match summary also appears on the official DFC website.

Dumbarton have taken a valuable point from an exciting 3-3 draw against Hamilton Accies away at New Douglas Park.

An amazing last gasp goal, thanks to a superb header from Chris Kane, ensured that Sons deservedly took something from the match -- after Accies had fought back from 2-1 down to lead 3-2 with only minutes to go.

The game started disappointingly for Dumbarton when Hamilton's James Keatings grabbed an opener on three minutes. But Sons were level after 27 minutes thanks to a great strike from Jordan Kirkpatrick.

The visitors went in front on 67 minutes through good work from Andy Graham, given as an own goal by Stephen Hendrie.

Hamilton stormed back. Keatings got his second before Jason Scotland looked to have stolen the match for Accies. Then up popped young Kane to head in at the near post for Sons, with just millimetres to spare.

Dumbarton slipped down one place to fifth in the SPFL Championship, after mid-table rivals Queen of the South beat Livingston, who now travel to the Bet Butler Stadium to face Sons on Wednesday night. The 5th February midweek game begins at 7:45pm.