A slice of Sons history

SINCE Dumbarton's extraordinary feat of scoring six against East Fife in the league on Saturday and six again versus Stenhousemuir in the Stirlingshire Cup last night, one question has predominated. Have Sons achieved that in consecutive matches before?

Club historian Jim McAllister comments: "We have scored six apiece in successive fixtures before. It happened on the 13th and 20th December 1958. The first result was 6-2 away to East Fife, and the second was 6-3 at home to Hamilton Accies. There may be more, but this is certainly one instance."

By keeping a clean sheet against the unfortunate Fifers, Sons therefore went one better than the class of '58, of course. Indeed, Dumbarton have now scored 15 goals in three games. Not quite three competitive games, however.

As Jim again points out, strictly speaking "Stirlingshire Cup ties do not count as they have different rules and are played under the auspicies of the Stirlingshire Football Association and not the SFA/SFL."

Nor will anyone in the dressing room be getting too carried away. After the international break on 3rd September, it's back to tough Second Division action with successive home games against Arbroath (10th) and Cowdenbeath (17th).

The lads certainly hope there will be big crowds to keep the momentum going and cheer them on to further success!
Posted by Simon Barrow at 00:43 No comments:

My preview was first published on the official DFC website.

There's more football action at the Rock this evening, as Dumbarton welcome Stenhousemuir for the semi-final of the 2011/12 Stirlingshire Cup.

Admission for the game, which starts at 7:30pm and is sponsored by the Stirlingshire Football Association, will be just £5 (£3 concessions), and there will be a souvenir programme on sale for only 50p.

Sons have won the Stirlingshire Cup trophy twice in a row now, with the last triumph being a 2-0 victory at SHS over a young side put out by First Division big boys Falkirk on a cold night last season.

Come along this evening and give your support to a Sons team seeking silverware for the third season in a row. Fourth, taking into account the Third Division Championship.
-------------
Posted by Simon Barrow at 08:56 No comments:

Hard-fought draw for Sons at Brechin

My match summary was first published on the official DFC website here.

Dumbarton earned their first point of the season with a creditable 3-3 draw away at Brechin City this afternoon. Sons weathered an early second half collapse and a sending off, after leading 2-0 at the break.

Goals from Scott Agnew (11 mins) and Jamie Lyden (28 mins), plus some good goalkeeping from Jamie Ewings, saw Dumbarton two up inside the first half hour and well in front by half-time.

But within two minutes of the restart Gary Fusco had pulled one back for the Hedgemen. Then on 51 minutes Alan Lithgow was sent off for a last-man foul on former Rock favourite Derek Carcary, and Paul McManus converted the resulting penalty. Five minutes later David McKenna capitalised on a defensive error to make it 3-2 to Brechin.

Dumbarton battled hard for an equaliser, despite being a man down, and a wonderful 25-yard free kick from Agnew delivered the goods on 89 minutes. Another away trip beckons for Sons next Saturday, this time to East Fife.
-----------
Posted by Simon Barrow at 17:12 No comments:

A great second half effort 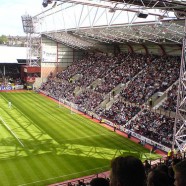 Hearts' new manager Paulo Sergio must have found that one of the hardest half-time talks of his career. Spurs' superiority is so great in the first-leg of the Europa League qualifier at Tynecastle, that it's difficult to see what they can do. Well, other than closing down space, putting pressure on the ball, going for man-marking, and running themselves ragged down the flanks. But it's the morale factor which also matters hugely.

Whatever Sergio said, it seemed to have worked some early magic. A series of Hearts attacks, three corners, a couple of close ones - including a great opportunity when Andrew Driver cut in from the right and almost found Ryan Stevenson with a low cross. Tottenham have barely been out of their half in the first 11 minutes. And a fabulous run from Templeton, just denied by a very pacey Walker. Good to see.

But then Gareth Bale breaks and makes it 4-0 to Spurs. Cruel. Let's hope the  Jambos can come away from this with some dignity in tact. Fantastic breakaway goal for Spurs. Hearts fans sportingly applauding... and chanting, "We're going to win 6-5!"

Hearts on the rack

Great to discover that the big Scotland-England clash is on ITV4 tonight. Even though I'm a Leither and a Son, I'd have loved to have got a ticket for the game at Tynecastle tonight. But it's going to be a tough watch, I fear.

On paper, even a weakened Tottenham Hotspur team playing its first competitive game of the season in this Europa League qualifier against Hearts are easy favourites - they are ten times as wealthy, for a start. And sadly, due to a little defensive over-crowding and a really unlucky deflection, Spurs have their away goal within the first five minutes - Van der Vaart being the man who's done the initial damage.

At the moment, just getting the ball is the Scots' main problem. John Sutton has just had a shot. But it would best be described as a long-range speculative punt. Then, oh dear, on 13 minutes Jermaine Defoe makes it 2-0 and the Spurs fans start to chant "easy","You're supposed to be at home" and "Are you West Ham in disguise?"

You won't catch me saying this often, but 'mon you Jambos! I fear that their main task now is avoiding too much humiliation. (As I type this, Defoe makes it 3-0).

Incidentally, the ITV commentators and summarisers haven't bothered to learn a single thing about Hearts.  Such arrogance.
----------
Posted by Simon Barrow at 20:08 No comments: