There's a brief report of the farewell to Gordon Lennon at the Strathclyde Home Stadium from the Dumbarton website here, with pictures.
-----------
Posted by Simon Barrow at 15:53 No comments:

A day to remember

Various commitments, combined with a distance of 360+ miles, means that I will not be able to attend the farewell for Dumbarton captain Gordon Lennon, which is taking place today. But my thoughts and prayers are most definitely with with those who do - and, of course, with Guido's family, partner, friends and young baby. Occasions like (and the funeral tomorrow) this can be very difficult and upsetting. Nothing can wipe away the tragedy of a young life snuffed out prematurely by sheer happenstance. Yet funerals are, more positively, a chance to remember, to give thanks, to resolve for life and to regain a sense of perspective on what and who really matters in the midst of the world's joyous and grievous oddnesses - including football. It will be different things for different people. Meanwhile, Robert Ryan is also galvanising a group of fans to work on a testimonial and memorial match and more. Good on ya, Rab, and all at DFC, who have handled the pain of recent days in a way truly befitting a community club.
----------
Posted by Simon Barrow at 11:22 No comments: 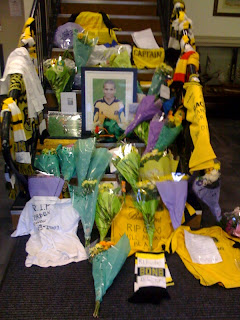 At Dumbarton's SHS Stadium. Also
a statement from the Lennon family.
Picture courtesy of Gilbert Lawrie.
-------------
Posted by Simon Barrow at 08:35 No comments:

Of all the numerous fine photos of Gordon Lennon around at the moment, for some reason this one (courtesy of Sonstrust and (c) photographer Donald Fullarton) is my favourite. Celebrating Dumbarton's recent Third Division Championship trophy with the fans. Very touching, and  one of many to remember him by. Good to speak today to several friends in and around DFC. The sadness is immense, but there are also heartwarming stories of human kindness and solidarity abounding. 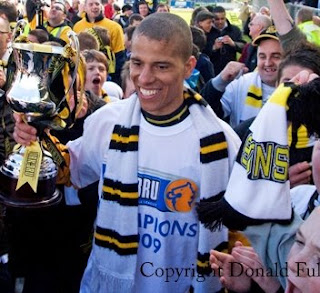 Posted by Simon Barrow at 23:58 No comments:

Like everyone connected with Dumbarton FC I was really shocked to hear this evening of the tragic death on Sunday of Club captain, Gordon Lennon, in a road accident. Just 26, with a 5-month-old child, about to be married, and having just lifted a trophy for the Sons which he regarded as the highlight of his far-from-finished career - he had so much more to give and receive. An awful loss. Words can seem so superfluous in the face of such tragedy. But they are frankly all we have, and though they can never take away the rawness and loss, they can, strangely and gradually, comfort, console, unite and reconnect us to life. The messages on the Sons Trust website, from people across the country and from other teams, as well as from the locality, are very touching to read. More can be added here.
I'm very grateful to Campbell Yule for letting me know about Gordon, as I had been otherwise occupied all day and had not checked the DFC site or seen the (now numerous) news reports. His own picture and anecdote are fine. As are Robert Ryan's comments on The Ben Lomond Free Press. Meanwhile Dumbarton CEO Gilbert Lawrie, who knows about tragic loss all too well, has reminded us of the picture many will want to remember Gordon by.  See also the Evening Times report, and others in The Scottish Daily Record and even (for once!) the Scottish Sun: "No one at Sons will ever forget Gordon's smile".
As for those Trust site messages, two stand out for me. Tommy Hughes writes: "Still numb with shock. A gentleman on and off the park, all round a helluva nice guy. Always smiling and an inspiration to everyone, young and old. [He] will be sadly missed by all the fans, staff and players at DFC. My thoughts and prayers are with Kelly, Kai and his family. RIP Gordon." Meanwhile, John Doyle, who knew Guido well, wrote: "I managed Gordon over a number of years during his time playing with Maryhill Boys Club and Harmony Row Under-21s. He was an absolute delight to work with, always smiling and game for a laugh with his team mates."
John adds: "Gordon was not only one of my best players but he was a close friend too. In fact we both used to get slagged at Harmony Row because we also spent a lot of time together outwith football, therefore everyone used to say he was “ma boy!”. I cannot put into words how proud I was of Gordon and all that he had achieved in his career. My deepest thoughts and prayers are with Gordon’s family but especially with [his fiancee] Kelly and his son Kai. Rest in Peace Guido x."
The picture above shows Gordon Lennon, on the right, with Dumbarton manager Jim Chapman, holding the 2008-9 Irn Bru Scottish Third Division Championship Trophy. I was there to see it lifted, and those memories will remain as long as I do.
-----------
Posted by Simon Barrow at 22:12 2 comments: