No, not Dumbarton in the Irn Bru SFL Second Division (though that too), but me in terms of reproducing match reports and summaries, posts from Changing Scottish Football and other bits of football writing (Sunday Post et al) here.

A BRACE of goals in each half gave a well-organised, resourceful Cowdenbeath side a comfortable 4-0 victory against Dumbarton at the Rock this afternoon.

The visitors were on the score sheet within eight minutes, as Marc McKenzie took advantage of a clever through-ball cutting across a square defence. Then Jon Robertson made it two after a scramble in the box on 19 minutes.

At several stages in the game Sons achieved a good deal of possession, but could not break down Cowdenbeath's solidly deployed back line and creative midfield.

Dumbarton came out firing in the second half, but the pattern of Cowden dominance repeated itself with Dominic Kennedy deflecting in Jordan Morton's effort under pressure on 68 minutes, and then the Blue Brazil's Scott Linton making it four with a swift breakaway goal on 86 minutes.

Sons now lie one place off the foot of the second division table. Next up is an away trip to Forfar Athletic on Saturday 24 September, as they try to re-ignite their league campaign. (17 Sept 2011).
Posted by Simon Barrow at 00:38 No comments: 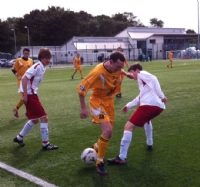 DUMBARTON'S under-19s have gone out of the Scottish FA Youth Cup at Ainslie Park in Edinburgh this afternoon, after a 4-3 defeat to Spartans FC in a lively and competitive match.

Sons had a good proportion of the possession in the first half, but found themselves three down to quick counter-attacking goals. Ryan Metcalfe and Ross Harvie had chances before Gary McKell pulled one back for Dumbarton, only for Spartans to strike back immediately, making it 4-1 to the home side at the break.

In the second period, Sons pushed forward strongly, and Reese Pearson scored a brace to narrow the gap to 4-3. But Kevin Murphy's team could not quite achieve the dramatic comeback they were aiming for, and which the enthusiastic band of travelling supporters were urging from the touchline.

An otherwise entertaining game with some good touches and performances was marred somewhat by a surprising spate of red cards. Three players from each side were sent off for infringements ranging from a push and a dive to offensive language.(11 Sep 2011).
Posted by Simon Barrow at 00:40 No comments:

IN another high scoring game, Dumbarton were finally defeated by confident looking visitors Arbroath, going down 4-3 after leading 3-2 at half time.

But the home team slipped up immediately after the restart, allowing Swankie to claim his second goal. Then on 68 mins an infringement in the box gave the visitors a penalty kick, which was firmly converted by Steven Doris.

"We had a lot of chances and the game could have ended six each," commented Dumbarton gaffer Alan Adamson. Sons now face Cowdenbeath at the Rock on 17th September, looking to get back on track in their Second Division campaign. (10 Sep 2011).
Posted by Simon Barrow at 00:42 No comments: