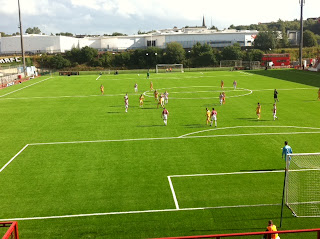 Dumbarton received a thorough 4-1 beating from Hamilton Accies at New Douglas Park this afternoon, in their first away fixture of the season in the new Scottish Championship.

After a bright start, Sons went behind just before the half hour when the referee adjudged that a follow-through from an Aaron Barry tackle, which caught another player, was a penalty infringement. James Keating made no mistake with the spot kick on 28 minutes.

Two minutes later things went from bad for worse when lax defending allowed Keating to grab his and Hamilton's second of the afternoon. Dumbarton were not able to pull a goal back before the break.

In the second half they tried to press a little more, and on 67 minutes Scott Agnew gave the visitors hope with a sweetly struck penalty after an Accies foul in the area.

For a brief time it looked as if Sons had the momentum and might storm back. But then more lapses allowed Accies' Grant Gillespie (72 minutes) and Anthony Andreu (77 minutes) to put the game well beyond reach.

Next up for Dumbarton is a home match at the Rock against Greenock Morton on Saturday 24th August, before Premiership side Dundee United visit the Bet Butler Stadium on Wednesday 28th in the second round of the Scottish League Cup.
----------
Posted by Simon Barrow at 18:25