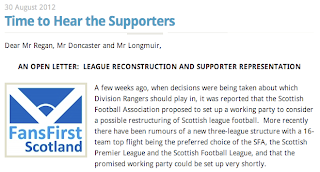 It follows the group's public statement yesterday, and precedes the imminent launch of the FansFirst Plan, which sets out an alternative path for the future of the game in Scotland, drawing directly on ideas tested with supporters.

The Open Letter can be read here. The Statement unpacks the issues is greater detail, and can also be found on the FansFirst Scotland website.

The full press release on AllMediaScotland can be found here.
Posted by Simon Barrow at 13:21